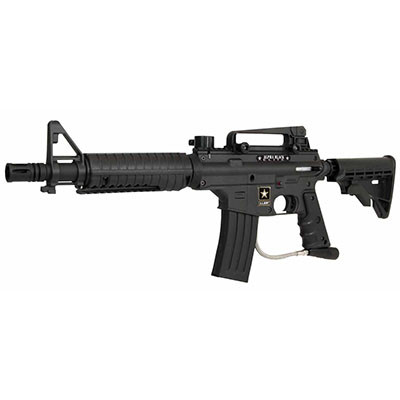 The Tippmann US Army Alpha Black Elite is essentially a training tool plus paintball marker. One look at it, and even inexperienced players or even people on the street, will know this marker looks exactly like the US Army M4 small arms rifle, a predecessor of the M16.

As the manufacturer even states – the marker is a licensed product of the US Army!

It is realistic to the point that it even replicates the weight, so inexperienced paintball players and veterans alike may not get used to the approximately 10 pounds of weight when fully loaded. In comparison, most other markers that aren’t meant for military simulation or training manoeuvres and for speedball or woodsball purely weigh usually less than 5 pounds.

However, even with the realistic weight and look, don’t let that fool you into thinking that the Tippmann US Army Alpha Black Elite is a one trick pony. As a Tippmann product, the range of customization options and cosmetic upgrades are there. However, if you want a near total conversion of this model into something flashier, it may not be so possible, since this product was meant to be for military simulation enthusiasts and training.

This model comes with a magazine, however depending on what set you order, you may or may not get the magazine. For military simulation enthusiasts, the magazine is a must have, so take note of which pack you order. While the mag serves no actual purpose in the workings of the marker, you can use it to store Allen keys and any small items you want to bring along, although it may add to the weight of the marker.

One of the upgrades available for this model is the E-grip. What the E-grip does is that it regulates gas flow pressure for each shot, allowing for a longer usage and fire capacity per each tank of C02 or HPA used, and also allows for different fire modes.

The fire modes available are semi auto, one shot per trigger pull, full auto, meaning maximum fire rate per trigger pull and hold, and 3 shot burst, which fires 3 paintballs per each trigger pull. That’s very useful for woodsball and for military simulation enthusiasts too, who probably will use the full auto and semi auto in accordance with real firearms.

The gun main body frame is made from aluminum, but the add-ons are made of good grade tough plastic. There is a 6 point adjustable stock, with a clip for a strap, seeing how heavy it might feel for paintball players, this is a handy feature. Don’t forget to adjust the stock to your liking though; it will help greatly once you find your own sweet spot. On top of that, the C02 line is reinforced with a weave, meaning that you can rest assured it’s not going to break anytime soon, and that’s great since C02 lines are hard to change.

While this gun has no anti ball chopping system, it surprisingly is quite good in that it doesn’t do so at all. An upgrade that we recommend is the cyclone feed hopper, however it is not listed as an official upgrade.

Also included is the removable receiver that will allow you to have the freedom of choice in adding different risers, mounts or even laser sights if that’s your thing just to suit your play-style. Not to forget, the picatinny rail which is often found in other Tippmann models is available in this one too, and removing it lets you add even more features, like a bipod, or a tactical light.

Speaking of tactical lights, those can get very handy if you choose the right one for night paintball matches, and we think it’s a by-product of the development stage due to its origins as a US Army licensed training product.

Lay Down Some Paint!

The Tippmann US Army Alpha Black Elite is great when laying down paint on the opposing team at medium to close ranges, and the accuracy is great. This works especially well in woodsball scenarios, however, it is not recommended for speedball due to its heavy weight which will make snapping around corners and vaulting obstacles a greater challenge.

Also read: What is the Best Paintball Gun to Buy? Tippmann vs. Empire vs. Spyder