There are a couple of key things to look for when purchasing a pogo stick, whether it's your first or your last. For instance, weight and size are always factors. A decent pogo stick should be light enough to be easily carried, and shouldn't be larger than the user. This is especially vital when purchasing pogo sticks for smaller children.

The age and experience of the user is perhaps the most important factor when choosing a pogos stick. Younger kids should not be using pogo sticks that are meant for adults. Most likely, they would want a stick similar to the Foam Master, to learn correct balance on. Conversely, an experienced pogoist would much rather have a pogo stick that can get them decent air. The Super Pogo 2 is great for these more experienced users, who would like a good pogo stick without sacrificing size, a problem with the larger sticks.

Also when looking for pogo sticks, the type and power of the spring should be a large influence on your decision. Some pogo sticks have a stronger spring, and can achieve a much higher height. However, especially for children, this isn't always a good thing. There are several different types of springs used in pogo sticks. Some have a classic spring, such as the Foam Master, while others have rubber-band springs.

The World of Pogo Sticks

Pogo sticks are great fun for anyone of any age. If this is your first pogo stick, get ready to take a step into a whole new world.

The feeling of bouncing on a pogo stick is a wonderful thing. Whether it's something you had to work hard to obtain, or a skill that came naturally, everyone loves pogo sticks. I remember when I was young, my brother and I used to count each other's bounces in a row. Pogo-sticking is an excellent source of exercise that is fun for the user. Once obtaining the balance, multiple possibilities await.

Why do you want to buy a pogo stick? Do you just want a great source of exercise that is also loads of fun? Or, did you want to learn some new, cool tricks? Whatever your reasons, pogo-sticking is the perfect solution for you. With new technologies and new versions of pogo sticks being produced every year, now is one of the best times to buy a stick. Some of the modern pogo sticks can get air height of up to 7 feet! However, sticks such as the Foam Master still offer the classic pogo-stick that everyone loves.

One of the biggest problems I have run into while researching various pogo sticks was finding solid reviews. Little information seems to be out there about pogo sticks, yet many people would love to have first-hand reviews regarding the stick they are looking to buy. That is why I have compiled an extensive list of many popular pogo sticks along with my personal reviews. Enjoy! 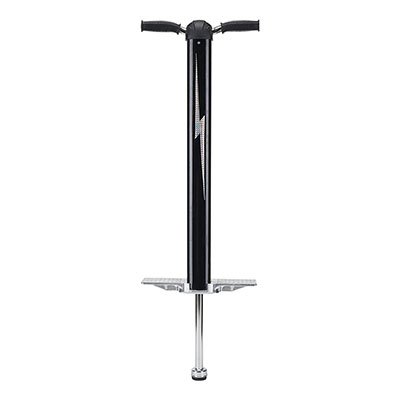 The recommended weight class for the Super Pogo 2 is 100-200 pounds, yet this can be stretched a little as the Super Pogo 2 can definitely support people of a higher weight. When you first receive the Super Pogo 2, the spring will most likely be very stiff. However, this goes away in a few days as the pogo stick gets more use and as the spring loosens up. Surprisingly, the Super Pogo 2 also has the ability to achieve heights up to 4 feet high. Although this is not as high as some of the big air sticks, 4 feet is still a lot of height and is sufficient for most people. The Super Pogo 2 pogo stick is a wonderful choice for those users who are looking to move past the beginner pogo sticks, yet do not want to try the most advanced pogo sticks.

Final Thoughts: In all honesty, the Super Pogo 2 is probably my favorite stick out there. The Super Pogo's durability is incredible, it achieves pretty awesome height, and is the perfect weight. Unless you are a beginner, I would strongly suggest the Super Pogo 2 as a valuable choice for any user. 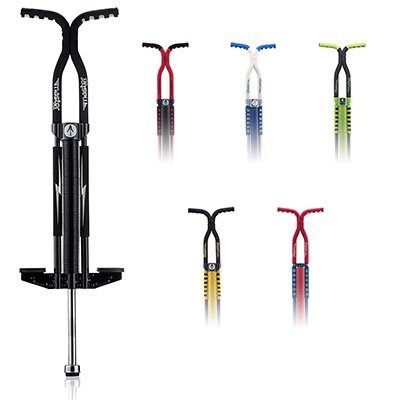 The Flybar Foam Master is perhaps one of the best, most balanced pogo sticks out there. It performs well in almost every category. The Foam Master is definitely one of the lighter pogo sticks, and bouncing on the stick is very easy. It is also designed for easy balance, as most users of the Foam Master are beginner or intermediate pogo stick users. Its durability is amazing too, and can last you many years. I once had a Foam Master pogo stick for over three years, and it still hopped along fine. The only large concern I have seen with the Foam Master is the wearing down of the rubber tips. Luckily, these tips can be easily replaced, and many models come with extra tips.

This pogo stick is more suited for children and teens as it does not allow for adjustability with the weight of the user. However, I have known many adults who have used the Foam Master pogo stick with ease. Overall, I would recommend this pogo stick to anyone, both the experienced and inexperienced. 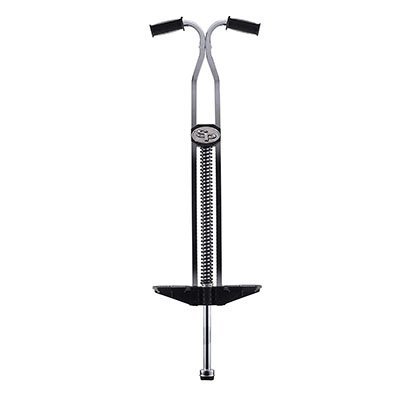 The Super Pogo 1505 pogo stick is not built for children, or lighter people. It can support almost all adults and teens, and is a great pogo stick for those older pogo-stickers who are unable to use the smaller, children-oriented pogo sticks. The Super Pogo is also one of the best pogo sticks for providing a workout, and will have you in shape in no time. Its considerable air time will allow you to perform all the tricks you want, for those more serious users.

Keep in mind that the metal sides of this pogo stick will bruise up your legs, unless you purchase some type of extra padding. Luckily, this will go away during the first few weeks of use, as your legs adjust to it. Other than that, the Super Pogo 1505 pogo stick doesn't have any big drawbacks. Being produced by Flybar, you can be assured that it is of the best quality. It is important to remember that this pogo stick shouldn't be purchased for children or lighter teens and adults. If you are looking for a serious, enjoyable pogo stick that will last you for a very long time, the Super Pogo 1505 pogo stick is your best bet. 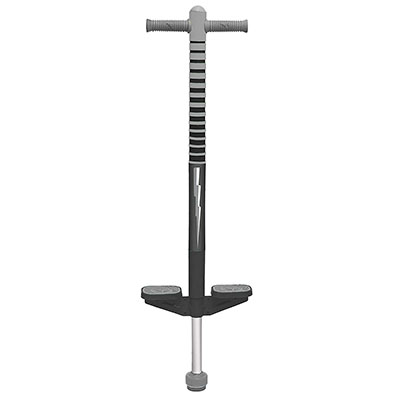 The Foam Maverick is similar to the Foam Master, except it is suited for younger children typically under the age of nine. Once again, as seen in the Foam Master, it has a covering of foam surrounding a metal frame to protect the user from the bruises and sores associated with a metal pogo stick. The Foam Maverick also has amazing durability, as seen in many of Flybar's models. It can last for two to three years easily, before the spring wears down. Also, the rubber tip problem found in the Foam Master is much less prominent, although there have been some cases of the rubber tip coming off.

Everything found in the Foam Maverick is designed for smaller and younger children. If you are over ten years old, and if you weigh over 100 pounds, this stick is not for you. Consider purchasing the Foam Master. However, if you meet these criteria, the Foam Maverick is perfect for you. Its light weight makes it easy for children to handle, and the wide rubber base assures that slipping is nearly impossible (remember, the tip could fall off, so be sure to check every once in a while). The Foam Maverick also has wide footpads and extra-grip handles, to decrease the chances of a crash for first-time users.

No matter how long you spend climbing out, you can still fall back down in an instant

Best Weightlifting Shoes in 2020: Powerlift vs. Adipower vs. Romaleos

Best Electric Guitar for the Money: Gibson vs. Epiphone

Ultimate Guide to Choosing the Best Instant Camera in 2020

Best Karaoke Machine for Kids and Home Use: Akai vs. Singing Machine

What is the Best Mini Quadcopter Drone: GoolRC vs. Eachine vs. Holy Stone

Is Garrett Ace 400 the Best Metal Finder? Fisher vs. Garrett

Evenflo vs. Graco vs. Britax: Which is the Best Infant Car Seat?

3 Best Water Coolers for the Money Reviewed: Coleman vs. AO

Best Shoes for Cross Training and Running: What is the Difference?

Choosing the Best Rowing Machines: Concept2 vs. WaterRower vs. Stamina

What is the Best Stand-Up Paddle Board for Beginners: SUP Boarding 101

Best Toaster Ovens to Buy in 2020: Convection vs. Compact vs. Countertop

Picking Up The Best Cold Press Juicer: The Ultimate Guide

Best Food Processor in 2020: Ninja vs. Braun vs. Breville vs. Cuisinart

What is the Best Food Dehydrator: Nesco vs. Excalibur vs. Hamilton Beach

What are the Best Tactical Knee Pads for Paintball: Alta vs. BLACKHAWK!

What is the Best Pet Camera in 2020: Petzi vs. Pawbo vs. Petchatz

What are the Best Weight Benches for Home: Marcy vs. Phoenix vs. Bowflex

What is the Best Paintball Gun to Buy? Tippmann vs. Empire vs. Spyder

Teva vs. Keen vs. Merrell: Top 6 Best Hiking Shoes for Women and Men